Catching up from the end of the Summer 2022 season, the headlines were…
– if you came to our Charity Concert at the Roper Theatre Bath
– and if you were at our concert in the bandstand at Keynsham, or the Village Fair at Bathampton,
– or if you saw us at Cribbs Causeway in early December,

Thank you – and we hope to see you again sometime during the 2023 season, which is just beginning to shape up.

We are back to our regular practice schedule of Monday nights at Lansdown for the Concert Band. As yet, we are not in a position to restart the Wednesday training sessions, possibly there will be developments later this year.

We do have some dates for concerts already:
This year our charity concert will be held at Saltford Community Hall, on Saturday June 17th. It’s a bit early to buy tickets, but we’ve had to confirm dates early because of other commitments for venues (there’s a coronation sometime, and lot of Bank Holidays).
We will also be playing in the Keynsham bandstand one Sunday afternoon in the Summer, and we’re already down for a couple of Christmas appearances.

The revised setlist for September (both concerts) is as follows:

asterisked scores are as distributed at 20th Aug rehearsals

On Thursday, July 5th, the concert wind band will be playing in aid of a local charity at St Stephen’s Church, Soundwell, Bristol, BS16 4RH. 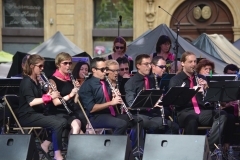